BAD DAY FOR THE BLEVINS CLAN

9/4/1887 - It is a very bad day for members of the Blevins clan! Seeking information on the whereabouts of her son (wanted for horse rustling and the murder of two sheepmen in Arizona's infamous Pleasant Valley War between cattlemen and sheep herders ... Mr. Andy Cooper, aka Andy Blevins, corpse-to-be), Sheriff Commodore Perry Owens (a flamboyant lawman known for his waist length blonde locks, wide-brimmed sombrero, hand-tooled chaps, long-barreled Colt .45, and a gunbelt holding double rows of ammunition) arrives at the Holbrook, Arizona (a small town near the Little Colorado River consisting of six saloons, three stores, a livery stable, a blacksmith shop, a post office and a handful of framed and adobe houses), home of Edna Blevins (with Winchester rifle at the ready should his visit prove unwelcome), suspecting his quarry might be hiding inside. 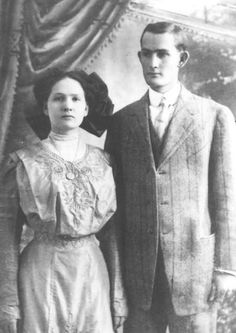 Owens
Born in Hawkins County, Tennessee on July 29, 1852, and named by his mother in honor of the War of 1812 Naval hero, Commodore Oliver Hazard Perry (the victor at the Battle of Lake Erie over the British, in which he notes the triumph of American forces by signaling General William Henry Harrison that "We have met the enemy and they are ours ..."), Owens moves with his family to liberty Township, Hendricks County, Indiana, where at the age of 13, he runs away form home and heads west.  Mastering numerous odd jobs to survive, Owens eventually becomes a buffalo hunter for the railroad workers, a task that also causes him to become a crack shot with both hands ... able to shot a rifle from the hip with deadly accuracy, and to entertain friends by shooting cans across the prairie alternating shots with his right and left hands.  Cowboying next on his resume, he moves from Oklahoma, to New Mexico, to Arizona, where he works as a ranch foreman on the Navajo Springs, Arizona holdings of James D. Houck and A. E. Hennings ... and it is there his guns find their first victims, Navajo warriors that go down trying to rustle horses Owens has vowed to protect (which earns him the nickname, Iron Man).  Hard case credentials noted, in November of 1886 he is voted into office (by 91 votes) as the Sheriff of Apache County, Arizona, responsible for policing an area of 21,777 square miles of territory that is greater than the combined size of the states of New Hampshire and Vermont.  Inheriting 14 unserved bench warrants from his predecessor, Jon "Don" Lorenzo Hubbell (who will become more famous for the trading posts he establishes, and the Navajo art he sells, than for his record as a lawman), when the Apache County jailed is cleaned up, all public funds are accounted for, and his deputies kill number one problem, the infamous Ike Clanton, Owens is free to pursue his next target bearing a bench warrant (for the theft of twenty-five horses from a Mormon ranching family), his former cowboy pal, Andy Cooper, aka Andy Blevins. 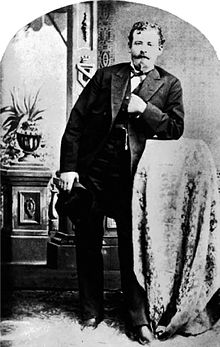 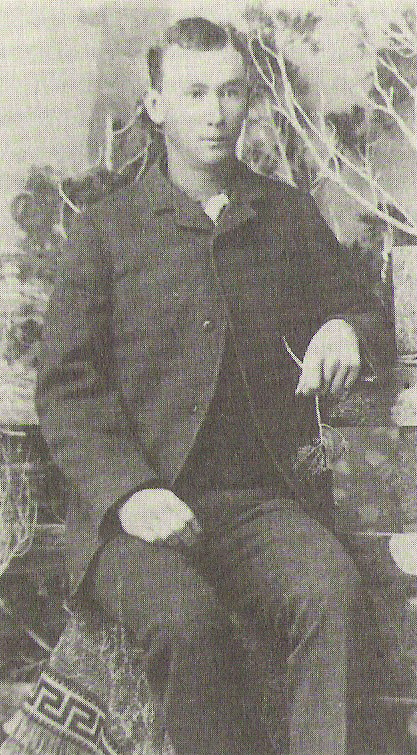 Blevins
Arriving in town, Owens puts up his horse, walks over to the drug store of Deputy Sheriff Frank Wattron, and inside, inquires into whether Cooper is in town.  Told he is, as Owens sits down and makes sure his weapons are clean and fully loaded, he turns down an offer of help from Wattron to bring in the wanted man, stating, "If they get me, it's alright, but I want you and everyone else to stay out of it."  Message received, he then solo marches 100 yards down the street, rifle and pistol at the ready to ask after his prey at the man's family's home ... possibly a very bad idea as there are 12 people occupying the house when the lawman arrives on the front porch of the Blevins home, all family and friends of the sought after fugitive, several armed to the teeth and in very bad moods (and some, young children).  What could possibly go wrong? 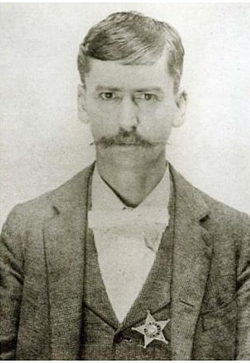 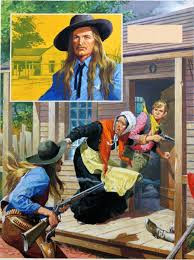 Yikes!
Wary with reason, despite knocking politely on the front door, the 35-year-old Owens is immediately accosted by his old buddy, Andy Cooper, holding a revolver and trying to slam the entrance shut in the sheriff's face (just back in town after participating in the ambush killings of John Tewksbury and Bill Jacobs), while at the same time, the outlaw's half brother, John Blevins (present when Owens arrives at the stable, he has rushed back to the house to warn the family that trouble is coming), also armed with a pistol, opens the house's other front door (to the right of the lawman) ... a split second later the gunplay begins.  Firing his Winchester from the hip, Owens puts a round through the door and into Cooper's stomach, then pivots his weapon and takes John Blevins out of the action with a round through his upper chest (a heart beat after Blevins fires on the sheriff, but missing, instead kills the Cooper's horse, tied to a tree across the street ... Blevins survives despite the wound and serves five years behind bars before being pardoned by the governor for his attempt to help his kinsman). 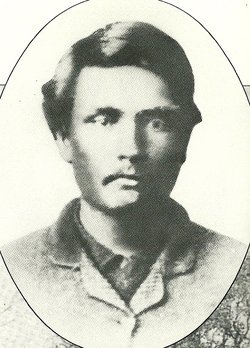 Tewksbury
Colt .45
Seeking a less exposed position, Owens backs up and fires at motion in the front of the house, hitting Cooper again, this time in the hip.  Owens then runs around the side of the house and is confronted by yet another gunman jumping out of a window with pistol at the ready ... a Cooper buddy and boarder in the house, Mose Roberts.  This time Owens gets off the first shot, a hit that doesn't allow Roberts any response other than instant death.

Roberts vs. Owens
Three cowboys down but the lesson as yet unlearned of the folly of taking on the Sheriff, seeking deadly revenge for his fallen brothers, 15-year-old Sam Houston Blevins grabs his brother Andy's weapon and runs outside yelling, "I'll get him," to confront Owens as his mother tries to hold him back ... it is a mistake that costs the youngster the opportunity of celebrating a 16th birthday, a shot through the heart sends the the teenager to Boot Hill (staggering backwards from the blow of the bullet, Blevins dies in the arms of his mother ... an unlucky woman who in the space of only a few months has lost her husband and three sons to gun violence, and had a fourth boy seriously wounded ... a living ghost, for the next fifteen years she will walk the streets of Holbrook in silence).  Gunplay finally done only because there are no more standing armed antagonists to fire upon, Sheriff Commoodore Perry Owens has killed three men and wounded a fourth with four shots in less than three minutes of Wild West action (move over John Wesley Hardin and Wild Bill Hickok!).  Marching back up the street to the livery stable, Owens is asked by several townspeople if he has finished his job, and answers with grim sarcasm, "I think I have."  Indeed! 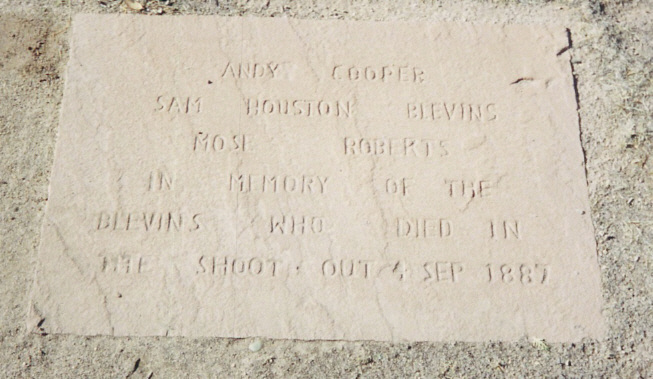 Rest In Peace
In the aftermath of the gunfight, Owens, in three separate coroner's jury's findings (one for each death), will be found to have performed justifiable homicides, but as Apache County becomes more civilized, his willingness to go to his guns and lack of formal education are deemed liabilities, and when he next runs for office, he loses to his own deputy, St. George Creaghe.  While there are no more shootouts in his career, he does continues to enforce the law, serving as a deputy sheriff, a U.S. deputy marshal, and then when Apache County is split in two, appointed by the governor, as the first sheriff of Arizona's new Navajo County.  Retired, he opens a general store and saloon in Seligman, Arizona, marries Elizabeth Jane Barrett, tries his hand at business in San Diego, California, and eventually moves back to Seligman, where he and his wife are residing when Arizona becomes the 48th state in the Union on February 14, 1912.  The aged lawman dies of Bright's disease (a kidney malady) on May 28, 1919, at the age of 67, and is buried in Flagstaff, Arizona. 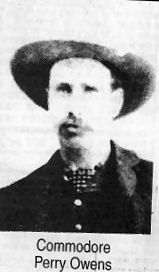 Posted by Lightning Bolt at 1:17 PM